The work described in this poster was conducted as part of a Master’s thesis project for the UCLA/Getty Conservation Program and presented at the Annual Conference of the Association of North American Graduate Programs in Conservation (ANAGPIC), Buffalo State College, April 24-25, 2009.

A Ptolemaic mummy cartonnage, belonging to the Robert V. Fullerton Museum at California State University, San Bernardino, seemed to be suffering from an alteration of the paint layers found on the object. The pigments used to decorate the mask had darkened and several areas, primarily those a dull yellow in color, displayed severe flaking. The flaking yellow pigment was found on alternating squares of the checkerboard pattern on the head, on the double headed cobra on the back, on the areas of the wig, above and below the headband, and on the face of the standing figure on the PL side of the mask. The aims of this project were to identify the cause of the flaking and treat the cartonnage.

In order to determine the causes of alteration to the dull yellow pigment, a technical study was conducted to identify the materials used in the manufacture of the mask, focusing on the pigments and binders applied to the areas now flaking. X-ray fluorescence (XRF), x-ray diffraction (XRD), Fourier transform infrared spectroscopy (FTIR), polarized light microscopy (PLM), gas chromatography-mass spectroscopy (GC-MS) and ultraviolet (UV)-fluorescence were employed to characterize the cartonnage. The ground was found to be made primarily of calcite (CaCO3) and the binder used for the pigments was a gum. Fatty acids identified in a brown material covering areas of the surface were thought to possibly be from the embalming material used for the mummy. The flaking paint was composed of the arsenic-containing pigment orpiment (As2S3), in addition to possible altered forms of the pigment such as arsenolite (As2O3) and pararealgar (AsS). Comparison of the flaking yellow squares on the head to the non-flaking yellow squares showed they both contained arsenic, but the quantity of arsenic in the flaking squares was higher.

Though the preliminary results of this research have helped to identify the materials used in the decoration of the cartonnage, no clear answer has been found to explain why some areas painted with arsenic-containing pigments are flaking while others are not. Further analysis will be undertaken to try and determine the cause of the flaking and whether the differences in the amount of arsenic in the yellow paint may be influencing the condition of the pigment in those areas. Treatment will also be conducted on the cartonnage to reduce the glossy material found on the surface, identified as Paraloid B-72 (an acrylic co-polymer resin), and to consolidate the areas of flaking paint. 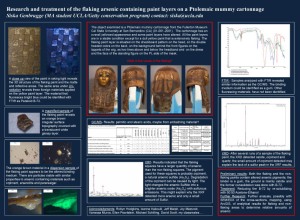 This week marks the beginning of classes at UCLA and the entry of the class of 2012 into the UCLA/Getty Conservation Program. This first few days of this week are filled with various orientations to lab spaces and the program in general. The conservation students attend a portion of these orientations with the incoming students to UCLA’s Archaeology graduate program to give them an opportunity to interact and enjoy tours and luncheons together before classes start later in the week.

We wish the incoming classes of both the Conservation and Archaeology program lots of success in their graduate studies!

Incoming conservation and archaeology students at the Cotsen Institute of Archaeology

The UCLA/Getty Conservation Program is pleased to welcome Visiting Postdoctoral Scholar Jenny Hallström. Jenny received her PhD in Engineering/Architectural Conservation and Restoration from Lund University (Lund, Sweden), and her focus is on non-invasive imaging and spectroscopic techniques of movable and immovable heritage. Under the mentorship of Prof. Ioanna Kakoulli, she will pursue research into the use of multispectral imaging for non-invasive diagnostics of surfaces and documentation of cultural heritage which could benefit from minimal intervention, future protection and preservation of artifacts and buildings, as well as the mitigation of the decay of materials. Her current project involves a study in collaboration with the Fowler Museum at UCLA exploring the potential of using non-invasive methods of examination and analysis combining broad band digital and multispectral imaging (from the ultraviolet to the near infrared region of the electromagnetic spectrum) with portable x-ray fluorescence (XRF) and ultraviolet/visible/near infrared (UV/Vis/NIR) spectroscopy for the documentation and recording of two Balinese paintings. This summer she also participated in the field work of documenting the caves of St. Neophytos Monastery in Cyprus. Jenny will be a scholar with the conservation program through mid-January 2010.