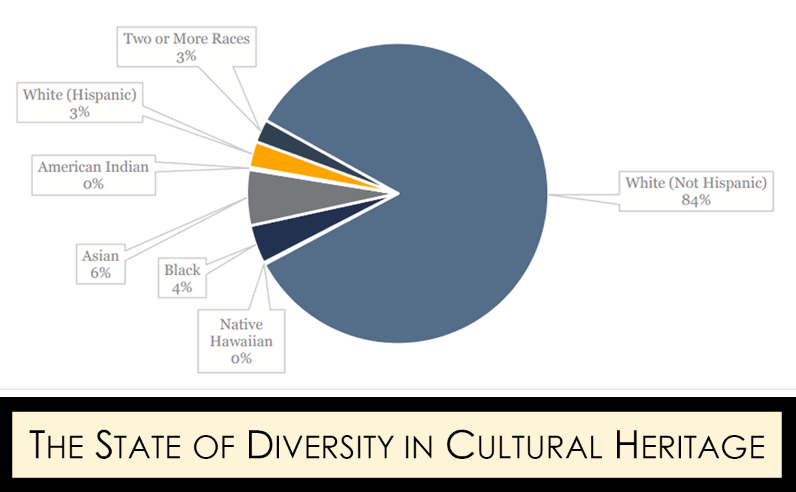 If our museums are to speak to and for our communities, they will need to reflect those communities. As of now, they do not.
In 2015, the Andrew W. Mellon Foundation commissioned a demographic survey of 643 art museums across North America. Among their findings was the observation that 84% of jobs most closely associated with the intellectual and educational missions of museums (e.g. curators, conservators, educators, and museum executives) were held by Non-Hispanic White individuals. Only 4% of those positions were held by Black individuals (according to the U.S. Census, 12% of the U.S. identified as Black/ African American that year). They also found that the percentage of historically underrepresented minorities in these positions did not significantly change across age cohorts, implying that this lack of diversity is not being overcome by new generations, even though the demographics of our general population are shifting. While a more recent demographic survey conducted in 2018 notes that there has been a 5% increase in the hiring of people of color to intellectual leadership positions since the initial survey, there is still a long road ahead before our field is fully representative of its communities.
What stories are not being told in our museums because we are missing the key storytellers?

To begin to understand what the lack of diversity can mean to black individuals working in the cultural heritage field we turn our metaphorical mic over to Ashleigh Brown, owner of the private conservation studio, The Conservators Ltd, and highly recommend readers take a few minutes to read her reflections. Although working in the UK, Ashleigh is a US citizen who grew up in Virginia. A recent post in ICON reflects on her experience of being black in the arts and cultural heritage field. Ashleigh is just one of a handful of black conservators in the UK, where black people make up just 1% of the workforce in the arts and cultural sector. A more detailed look at the demographic makeup of the UK field can be found in this 2013 equity and diversity report by Consilium.